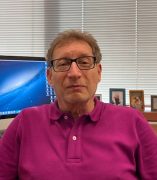 Signal Transduction and Cellular Polarization in Yeast
Collecting information about the environment, integrating it and responding in accordance with changing conditions are essential abilities required of all cells. In eukaryotes, one of the most common strategies for detecting and transmitting information across the plasma membrane utilizes surface receptors coupled to heterotrimeric G proteins. Animal cells depend on membrane bound receptors and their associated G proteins to sense hormones, cytokines, neurotransmitters, odorants and light; unicellular eukaryotes use similar molecular switches to communicate with one another and to coordinate developmental fates.

It has been estimated that a 1% difference in receptor occupancy across the 4 - 5 microns length of a yeast cell in a pheromone gradient is sufficient to elicit robust orientation toward the pheromone source. We are interested in how such a shallow pheromone gradient is accurately interpreted by yeast cells to promote directional growth toward a mating partner. How do cells navigate using such subtle cues? Models of this and analogous processes invoke positive feedback loops that amplify small differences in receptor activation across the cell surface into a substantially steeper intracellular signaling gradient. Our data suggest that the pheromone responsive heterotrimeric G protein functions in a network of interacting positive feedback loops that establish and amplify receptor polarity, link the position of the receptor to the actin and microtubule cytoskeletons, and underlie the tracking of dynamic gradients. The goal of our ongoing investigation is to elucidate these mechanisms.