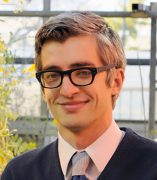 [Please go to the lab webpage, linked above, for a complete publication list and other detailed information.]

My lab seeks to advance our understanding of mating system evolution, and more broadly the patterns and causes of trait changes and their effects on diversification.

Mating systems have wide-ranging effects, including the their strong causal association with the magnitude and distribution of genetic diversity. Our work has long aimed to uncover both the causes and consequences of mating system transitions and the observed variation in mating systems within and between species. We are presently engaged in an effort to generate massively parallel  sequence data for the inference of population genetic patterns and phylogenetic relationships in the nightshade plant family (Solanaceae). We continue to work on detecting and fixing the multitude of problems with macroevolutionary inference of trait evolution (Igic et al. 2006, Goldberg and Igic 2008, 2012).. One of the goals of this line of research is to properly order breeding and mating system transitions and ask how contrasting mating systems influence evolutionary fate of lineages.

We are also interested in the link between genotype, phenotype, and environment. Until recently, we pursued this interest principally in the context of self-incompatibility systems, where the fitness consequences of new phenotypic variants are well understood. Self-incompatibility (SI) is defined as the ability of plants to recognize and reject their own pollen. It commonly involves linked pollen- and style-expressed genes, which must co-evolve to maintain the ability to recognize each other. Genes associated with self-recognition systems such as SI in plants, mating type loci in fungi, the sex determination locus in hymenopterans, and the MHC in jawed vertebrates experience selection for rare alleles, and thus harbor extreme allelic polymorphism. This polymorphism is typically manifested as a spectacular number of alleles maintained in natural populations (up to 200; Lawrence 2000), and high molecular divergence among alleles (Ioerger et al. 1990), implying long times to coalescence of allelic polymorphism. Because of its unique characteristics, the study of SI can provide information concerning historical population genetic changes (e.g. bottlenecks; Richman et al. 1996, Igic et al. 2004), the order of mating system transitions (Igic et al. 2004, 2006, 2008; Goldberg et al. 2010), and provide insights into the link between nucleotide transitions, traits, and ecological setting.

In addition, the lab is entering a number of exciting collaborations aimed at improving the methods for reconstruction of ancestral states and detection of differential diversification rates in a variety of traits not confined to plant lineages, finding co-evolved regions/residues of interacting molecules under positive selection (in the absence of experimental evidence), and identifying genomic regions and genes responsible for reproductive isolation and ecological divergence between species.