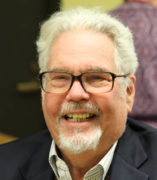 Ciliated protozoa are single-celled eukaryotic organisms of ancient origin. Because of their relative ease in handling and their abundant numbers, these cells are used as a model system for analysis of many basic research problems in biology. Currently, my laboratory group is investigating two problems using the contractile ciliated peritrich protozoan, Vorticella convallaria. The stalk of Vorticella contains a contractile organelle called the spasmoneme, which does not require ATP for contraction, but instead uses calcium. We have cloned the gene that codes for a protein called spasmin, believed to initiate contraction. Spasmin contains highly conserved calcium-binding motifs called EF-hands. The spasmin of Vorticella is related to a group of contractile filament-forming proteins, called caltractin or centrins, that have been described from phylogenetically diverse groups of animals and plants, ranging from Chlamydomonas to man. Using a system of synchronous stalk formation, we have produced a cDNA library from poly-A messenger RNA and have isolated part of a gene believed to represent a caltractin/centrin homolog in Vorticella. We are now in the process of cloning and sequencing that gene. Whether there are several copies of these genes in Vorticella or whether the spasmin subfamily is distinct from the caltractin/centrin subfamily is not presently known, but our laboratory is in a position to answer these questions. Furthermore, once isolated, we plan to clone the gene into a prokaryotic expression vector to overproduce this protein. Using this system, we should be able to study many of the molecular and biophysical aspects of this protein.

There are several different components to the stalk, including a membrane bound spasmoneme which is continuous with cell body contractile elements called myonemes. The bulk of the stalk is extracellular, being made up of a matrix and a non-membraneous sheath stalk. The distal end of the stalk is differentiated into the adhesive pad which affixes the stalk to the substrate. All of these structures, with the exception of the spasmonene, are formed by exocytosis of material contained in vesicles.

As a second major research project, we are studying exocytosis of the stalk in V. convallaria. We have synchronized the transformation of the contractile sessile form to the motile telotroch form. The telotroch swims about until it finds a suitable site for attachment at which time it forms a new contractile stalk. We have studied this system using the electron microscope and find that stalk precursor material is contained in vesicles that are exocytosed through pores in the aboral region (posterior end) when the cell settles. The initial stalk formation occurs instantaneously when the telotroch settles on the substrate and is driven by calcium. Then stalk elongation continues apace, with 20-30 m of stalk being formed in 20 minutes. The stalk may grow to several hundred micrometers in 24 hours.