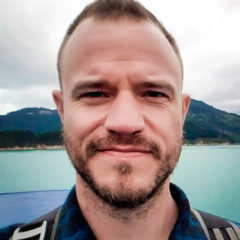 Oligocene origin and drivers of diversification in the genus Sticta (Lobariaceae, Ascomycota). Molecular Phylogenetics and Evolution 126, 58–73 (2018).

Chemotropism, or directed cell growth, depends on the ability of cells to accurately sense chemical gradients. During mating, the budding yeast Saccharomyces cerevisiae uses GPCRs to sense the pheromone secreted by potential mating partners. In response, yeast cells form a mating projection in the direction of the nearest partner. The GPCR Ste2 is distributed uniformly on the membrane in vegetative cells. Until recently, it was thought that the receptor and G protein polarize directly to the chemotropic site (CS), in the direction of the pheromone source. On the contrary, we have discovered that mating cells first polarize the receptor and G protein to an intrinsic default polarity site (DS) before redistributing these signaling proteins to the CS. We refer to this redistribution as tracking. This finding led us to divide chemotropism into three stages: polarity establishment at the DS, tracking from the DS to the CS, and stabilization at the CS just prior to morphogenesis. Sst2 is an RGS (regulator of G protein signaling) family member that stimulates the GTPase activity of Gα-GTP and preferentially binds to unphosphorylated receptor. Sst2 is critical for gradient sensing and has been proposed to act as a signaling barrier surrounding the mating projection. It is currently unknown where Sst2 localizes and when it is active during polarity establishment, redistribution, and morphogenesis. We used time-lapse fluorescent imaging to follow the dynamic localization of Sst2-GFP and Ste2-GFP in mating yeast cells. Sst2 appeared at the DS after the receptor, started tracking just before the receptor, and tracked from the DS to the CS like the receptor. Upon morphogenesis, Sst2 surrounded the stabilized receptor at the mating projection. Sst2 localization is likely determined by active-unphosphorylated receptor and the availability of its substrate, Gα-GTP. This distribution is consistent with Sst2 serving as a signaling barrier. Notably, the receptor failed to redistribute in sst2∆ cells, suggesting that the spatiotemporal dynamics of Sst2-catalyzed G-protein recycling is critical to gradient sensing.

Title: The yeast claudin Dcv1 contributes to the polarization of mating functions

Title: The yeast claudin Dcv1 contributes to the polarization of mating functions